Review of the Suffragette Scandal by Courtney Milan 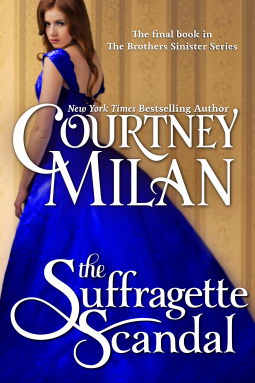 Courtney Milan's writing is intelligent, delightfully complex, exciting and witty.  Her dialogue is brilliant, her prose is compelling and makes me jealous because I could never write like her.  The character development is this book is amazing.

The hero is a self-proclaimed scoundrel.  Arrogant with his own sense of honor and he claims to have no scruples.  He is also handsome and charming.  The heroine is strong, brave, stubborn and dedicated to her cause.  He has never come across a women like her and is unwillingly intrigued by her.  They both have the same traits.  They won't take no for an answer and are sure they can outwit anyone and not care about the way they go about it.  They are kindred spirits, they just do not know it yet.  She is a brazen bit of baggage that he wanted from the start, which is a surprise since he hasn't wanted to exert himself for anything or anyone in a long time.  Caring about what people thought of him was a waste of his time.  Only deep down he is insecure and feels that he will never be happy again.

When he was younger his father and brother stranded him on the continent and would not help him get home when a war started.  He was held prisoner and tortured until he almost lost his sanity.  He did anything he had to do to survive. During this time he has seen and done things that he thinks has destroyed any good that he ever had in him.  He returns to England to help an old friend who has always stood by him.  His friend's younger brother is in trouble and it his brother who is causing the problem.  He meets Free (the heroine) when he is investigating and finds out that his brother is trying to destroy her also.

He saves her business with her help and in the process he falls for her.  He knows he cannot stay in England because he is about to be declared dead after being missing for seven years and that's what he wants, or so he thought until he met Free.  He makes himself leave her, but in a moment of weakness he gives her his address and they start a correspondence that neither of them can or want to stop.

His deepest secret is the man who tried to destroy her is his brother.  If he goes back his secret will come out and she will never forgive him.  He finds out that his brother is still trying to destroy her and he returns to England to save her.  The only way he can do that is to claim his title, and he knows that when she finds out she will leave him.  But he marries her without telling her and then ........no more spoilers.....The rest you will have to read for yourself.

While I was reading this book I had to stop and take notes so I would not forget anything and also to remember how reading it made me feel.  Anybody who has never read historical romances should start with this author and you will be hooked like I am.  This book is a must read for everyone who adores a great love story.  It is also one of the best I have ever read.  And you will also understand the thimble reference.


Posted by The Reading Wench at 8:38 PM No comments: