ARC Review of His Scandalous Kiss by Sophie Barnes 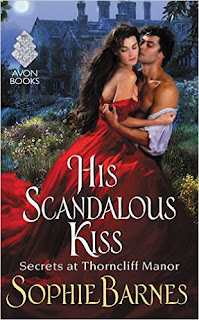 Another amazing addition to the Secrets at Thorncliff Manor by Sophie Barnes.

This is the story of an honorable gentleman and soldier.  Richard Heartly hides himself away from Society and his family because of the scars he received during the war.. Everyone but his family thinks he is dead so that he can get his revenge by ruining the man who betrayed him..  He is so close to his goal when he meets a young lady at Thorncliff Manor that makes him question the life he has chosen to live.

Mary is taking a moment away from the noise and crush of people outside in the garden of Thorncliff Manor's ballroom.  She is unaware of the man watching her from the shadows.  She is at the Manor with her Aunt who is determined to find her a husband.  Mary knows that is is impossible for her to marry because she has a secret that could ruin her whole family.  When she spots the man in the mask watching her she is at first startled until she realizes there is something about him and invites him to sit with her and listen to the music.   Oh did I forget to tell you, this is a Masquerade Ball and they are both wearing masks.

They both are drawn to each other and start meeting in secret, but Richard still hasn't revealed his idenity or his face.  He is afraid that Mary will be horrifed by his scars and not want to be with him. But he has underestimated Mary's feelings and the lengths she will go to win Richard's heart.

There are so many layers to this story.  More than one Villan, a mysterious underground Roman Villa, and intriguing secondary characters that hopefully will have their own books.

Sophie wrties a beautiful love story that is filled with the emtional peaks and valleys that draw you in to the story till the very last word.  Her historical research is evident in all of her books mixed with her own version of some of the events and characters that make this a fascinating and compelling read.  It always amazes me how much history I learn when I read Sophies books.

I am a big fan  of her writing and recommend this book.  You will love it.