Review of Blame it on the Duke by Lenora Bell 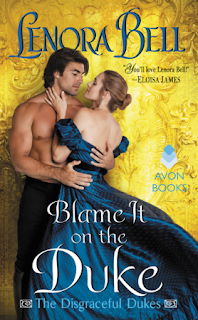 The third book in The Disgraceful Dukes is a must read.

We finally get Nick's story.  He is a Marquess in line for a Dukedom.  He is a walking scandal.  All night bacchanals, courtesans, masquerades and wine are his specialty.   What he doesn't show the world is the nightmare that he has been living watching his father go slowly insane.  He takes care of his father and has a male companion with him at all times.  Apparently madness runs in the family.  He also has a secret mission that no one knows about involving helping those who are confined in a mad house by a relative or husbands to get rid of them.  He has decided that his line will die with him.  He does not want to marry, fall in love or have children.  What he doesn't count on is his father somehow escaping the house and gambling him away to a Baron's daughter in marriage.

Alice is the daughter of a Baron and her mother wants desperately for her to marry into the upper echelons of Society.  Alice wants nothing to do with marriage.  She has sabotaged every attempt her mother has made at matchmaking.  All she wants to do is travel to India and have an adventure.  She has in her possession an ancient Sanskrit manuscript of missing copies of the Kama Sutra and she has translated them.  She wants to go to India to donate them so that they can be published.

You know what they say about the best laid plans.  When Nick shows up at her door and tries to get out of the marriage, Alice has no objection.  Only Alice's father is adamant and her mother is over the moon.  Their is no getting out of this mess without Alex compromising his father's honor.  So they agree to a marriage of convenience.  Nick will stay in London and Alice will go to India and have her adventure.

This is a compelling, intelligent , extraordinary story of how your perspective of your world changes when you meet someone you were sure could never exist.  Lenora's writing is exquisite, lyrical and beautifully sensual.  I have read all three novels in this series and I recommend all of them.  The characters have a depth to them that will allow you to immerse yourself in them and become part of them.


Posted by The Reading Wench at 9:41 AM No comments: