Review of What A Woman Needs by Caroline Linden 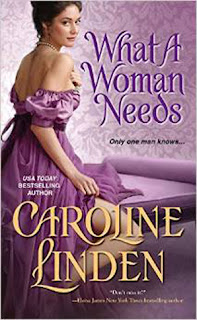 I knew this book was familiar when I started reading it.  This is a re-release of Caroline Linden's first book originally published in 2005.  It was a pleasure to read again.  This book is the reason why I became a Caroline Linden fan.  The heroine is not the usual Historical Romance protagonist.  When Charlotte was seventeen a fortune hunter ruined her.  Her father banished her and she left England.  She became an independent woman who chose her life style and her men.  Now she is back in England as the guardian to her young niece who is being courted by a the same kind of man who ruined her and she is determined to stop a man from doing to her niece what happened to her.

Stuart is a Gentleman who needs to marry money.  His Grandfather and Father are still hale and hearty and he has bought his own Estate and needs an infusion of cash to make a go of it.  He has a reputation of a rogue and a seducer of innocents.  His Father has cut off his funds and believes him to be irredeemable. When Charlotte and Stuart meet the sensual sparks fly and the adventure is on.  This story has a everything you want to read in a Historical Romance.  Mystery, an unknown villain, a treasure, sizzling sexual attraction and a beautiful love story.  This was a book worth re-reading and for 99 cents it is a book that you must not pass up. 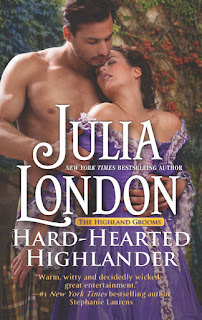 The second book in the Highland Grooms Series is a powerful heart wrenching story of lost love, tragedy and how two people make the journey back to life and love.

First let me say that there are parts of this book that took fortitude on my part to read, but it was worth reading through some really sad parts to a HAE.  This book is about Rabbie MacKenzie the brother of the hero from "Sinful Scottish Laird".  Rabbie has lost his will to live.  He has watched his precious Highlands be decimated by the English after the battle at Culloden , the love of his life died a terrible death and his clan is barely scraping by.  He is just going through the motions for one reason, because no matter how much he doesn't want to go on he knows that if he died his family would be devastated.  Now Rabbie has agreed to marry a young English woman who will bring much needed money.  He doesn't want anything to do with her when she arrives at his home.  He is not even trying to endear himself and is being rude and dismissive an all around ass.

Accompanying the bride to be from England is Bernadette Holly.  A ladies maid with a terribly tragic past. She and her love ran away from home to marry, defying her wealthy Father, who wanted her to marry  a nobleman to help him gain access to into the Ton.  Her father's men catch up with them days after they were married and drag her husband away.  She is taken home and her marriage is annulled.  She later finds out that her husband was conscripted into the Royal Navy and died at sea.  She then finds out she is pregnant but loses the baby when her father strikes her and she falls down a flight of stairs.  She has hidden deep in her mind and heart the crippling pain that has shaped who she is and what she has become.

How can Rabbie and Bernadette help each other when it is clear that the only thing they have in common is pain and heartbreak?  I have read everything that Julia has written in Historical Romance, this story is darker in that Julia delves deeper into what makes these characters so special.  They are both strong, intelligent characters who come out even stronger in the end.  There is conflict, redemption, and best of all a happy ending for them.  I am a fan of Julia's writing and think this book is a must read.

Posted by The Reading Wench at 10:29 PM No comments: