Review of A Counterfeit Heart by K.C. Bateman 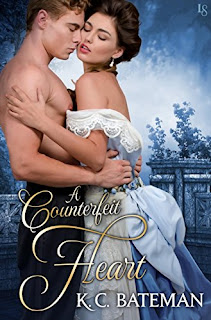 This is my first K.C. Bateman Book and I really enjoyed this story.  She had me hooked from the beginning.  Her writing is so seamless, intelligent and stimulating that I was half way through the book before I even looked up.  Great character development with an intricate exciting plot.

Richard is a Gentleman who has everything, money, a title, any woman he wants.  He is also a spy who has been trying to catch a Frenchman, Phillippe Lacorte, a counterfeiter.  He never expected that he would show up at his front door and that he was a she.

Sabine de la Tour is an artist who has used her artistic talent to become a counterfeiter to survive in war torn France.  Napolean is exiled and Sabine wants to leave her old life behind and start over.  She has a plan and Richard's cooperation is crucial.

From the first meeting, they challenged each other.  I loved the witty back and forth. Richard and Sabine were perfect for each other.  Once Richard realizes that he doesn't want to live a life without Sabine he has to convince her that they could have their HAE.

This is the 3rd book in The Secret and Spies Series and is also a great stand alone story.  I will be going to Amazon to buy the first two in the Series.

Posted by The Reading Wench at 5:05 PM No comments: 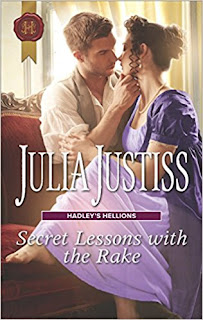 The fourth book in the Hadley Hellions Series is wonderful.  We finally have all the Hellions with their HAE.  Christopher Lattimar is the Rake of the group.  He enjoys the ladies and they enjoy him.
He is now the only Hellion not married and feeling a little left out.  He knows that if he decides to get married it will have to be a lady who has a sterling reputation and will be able to become adept at hosting political dinners and hold her own in intellectual conversations.

Ellie Parmenter is a lady who at 18 was sold to a man thirty years older as his mistress by her father to get out of debt.  Now that her protector is dead she is determined to make a difference in the lives of the young woman who have no resources or anyone to help them.  She opens a school to help indigent woman a place to live and learn a trade.  Ellie will never become another man's mistress again.

Christopher always had a secret crush on Ellie when he saw her out in Society when he was younger. He knew that she was terribly unhappy but could do nothing to help her while she was under another man's protection.  Now that she is free he cannot seem to stay away from her.  He sees it as his responsibility to protect her from other Gentleman who would insult or press their attentions on her. She is adamant that she will never be another man's mistress again and he cannot marry her.  There is such a powerful attraction between them, the chemistry sizzles and makes it impossible for them to keep their hands off each other.

The crux of their dilemma is that Christopher needs a wife who can help him politically, but he knows that only one woman can make him happy.  Can they overcome the obstacles to their happiness and follow their hearts?

Julia has concluded the Hellions Series is a spellbinding, heartwarming, beautiful story of two people who will have to examine their hearts.  The journey that Julia takes us on is worth every second of reading their story.  I loved this book!!!

And now I would like to introduce the Author of this Amazing book!

Julia, can you tell your readers how you came up with The Hadley's Hellions?


IT STARTED WITH AN ORPHAN


It’s breathtaking to realize that it’s been almost twenty years since my first story, THE WEDDING GAMBLE, went into print.  Sarah Wellingford, the heroine, had a large family, but at the time, the editors for Harlequin Historicals weren’t keen on having a series of books that featured other family members or friends.  Bringing connected books out back-to-back was considered the best way to market a series, and with so many writers doing stories for the brand, it was difficult to schedule a single author several months in a row.


So after GAMBLE, I wrote other books, returning now and then to do another Wellingford family or friend.  (There are now five novels, THE WEDDING GAMBLE, THE PROPER WIFE, A MOST UNCONVENTIONAL MATCH, FROM WAIF TO GENTLEMAN’S WIFE, SOCIETY’S MOST DISREPUTABLE GENTLEMAN, and a novella, .)  When I wrote WAIF, Davie, a plucky farmer’s orphan who helps rescue the heroine from the villain, so impressed the hero that he decided to become the boy’s sponsor.  I knew Davie would grow up with ambitions to enter Parliament and help change the nation, and that one day I’d have to write his story.
Over the years, the thinking about publishing a series of books changed (because readers love them, don’t we?) and the editors encouraged us to write linked books.  I worked first on my Ransleigh Rogues, and then decided it was time to tell Davie’s story.
Although technically, his book links back to the Wellingford books (his heroine, Faith, is Sarah’s youngest sister) I also wanted him to have a series of his own.  But Regency Romanceland is populated by dukes and marquesses and duchesses and earls, not by humble farmer’s orphans.  I knew Davie would need to be part of a group whose leader was an aristocrat, albeit a disenchanted one.
So Giles Hadley, estranged son of an earl came to life, the leader who gives his name to the whole group.  All the rest would need to be of aristocratic stock, too, but have some reason not to have fallen in with the comfortable complacency of their peers, oblivious to the needs and problems of anyone not born to their rank. So came Ben, bastard son of an earl and a governess, and Christopher, technically legitimate but suffering all his growing up from the taunts of his schoolmates about his immoral mother.
Wanting to insure his children never suffer the same fate, when Christopher (reluctantly) decides it’s time to look for a wife, he knows one of his chief requirements is a woman of impeccable reputation.  Unfortunately, the woman he finds most compelling, a young friend of his mother’s who was formerly a courtesan, is neither wealthy nor considered virtuous.  In fact, she would be nothing but a detriment to a man aiming for an illustrious career in Parliament.


But convincing his heart to abide by what his head tells him turns out to be far more difficult than Christopher imagined.  I hope you’ll enjoy Ellie and Christopher’s story!

Posted by The Reading Wench at 12:40 PM No comments: