Review of The Heiress's Deception by Christi Caldwell 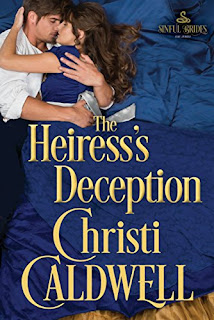 It seems I have been waiting an eternity for Calum's story in The Sinful Brides Series.  I devoured this book in less than a day.  The fourth book in the series is just as wonderful as the first three.

Calum is the proprietor of a gaming hell whose only interest is taking care of his family by making his club the best in London.  He needs a bookkeeper.  When a woman shows up five days late for an interview he is about to kick her out but he desperately needs a bookkeeper, he decides to give her a chance.  He does not recognize her, but they knew each other when he was a pickpocket on the streets of St. Giles and she was a Duke's daughter who used to feed him and talked to him like he was someone.  She also was almost the death of him.

Lady Eve Pruitt is in mind-numbing terror fleeing from her evil brother who will do anything to get her dowry of 20,000 pounds.  He has even encouraged one of his cronies to rape her so she would have to marry the scoundrel and split the dowry with him.  She becomes the bookkeeper at The Hell and Sin Club until she reaches her majority in three months time and donates her dowry to the foundling hospital where she volunteers.  She knows if she gives up her dowry her brother will leave her alone.  Only she doesn't expect to meet her childhood friend who was supposed to be dead.  Her brother told her that he was dead and it was all her fault.

This is the story of two vastly different people from opposite backgrounds who find common ground in the pain and horror that they each experienced.  Christi writes a tale of horrendous betrayal, heartbreaking emotional pain and the realization that it doesn't matter where you come from. love doesn't discriminate, and redemption and forgiveness can bring a happily ever after.  I absolutely loved this book and am not ashamed to admit I cried while reading this book. Christi is an amazing talent and we can only hope that she will keep writing wonderful stories for us to devour.

Posted by The Reading Wench at 6:32 PM 2 comments: 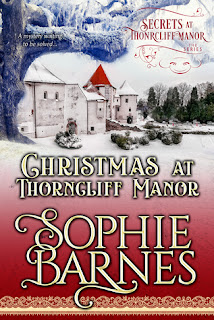 This is the last story from Sophie's wonderful Thorncliff Series.  The chance of finding a hidden treasure and the love of your life brings the ladies of the Heartly Family to Thorncliff Manor.  The four remaining sisters and their parents have arrived at Thorncliff for a Christmas House Party.  No one suspects that Lady Duncaster is playing matchmaker for the holidays.  She invites four bachelor Lords who she thinks will make perfect husbands for the sisters.  Include the possibility of finding a lost treasure and you have a wonderful holiday novella that will satisfy your craving for splendid Historical Romance.  I love Sophie's writing and am sad that this is the end of the Thorncliff Series but she is one of my must reads authors and I will always be a fan.
Posted by The Reading Wench at 5:05 PM 1 comment: