Review of A Kiss from a Rogue by Elisa Braden 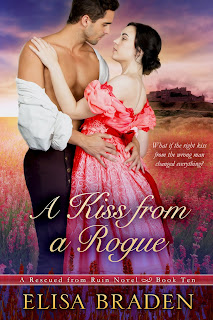 A stunning and beautiful story that will be the last in one of the best series in recent Historical Romance.  This is book ten in The Rescued from Ruin Series. I have read and enjoyed all ten books.  These are also wonderful stand-alone love stories.

This story is about a young lady who has endured ten years of physical and emotional torture.  A man who has spent most of his life at war.  They are brought together in a perilous journey that will test both their spirit and their hearts.  Can they overcome the past and build a future together.  Hannah and Jonas are unforgettable characters that will capture your heart.

You also get to catch up with the characters from all the previous books. This story is full of tear-inducing moments, along with witty banter that makes this story a must-read.

Elisa's writing is incredible, right up there with some of the best in this genre.  The depth of the emotions that she brings out in her characters and stories is the reason I will always read her novels.
Posted by The Reading Wench at 5:55 PM No comments:

Review of Brazen and the Beast by Sarah Maclean 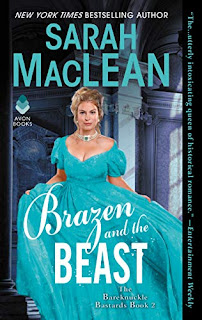 What do you get when you mix a headstrong Lady who is determined and ambitious and a ruthless Bastard who rules the most dangerous neighborhood in London along with his siblings?  The answer, a tale of adventure, intrigue, heart-stopping danger and a love that will last a lifetime.

Meet Miss Henrietta Sedley, daughter of a self-made shipping magnate that has been granted the Title of Earl by the King.  Henrietta is more comfortable on her father's ships and docks than she is in any Ton event. Her dream is to own and run the business after her father.  She just has to convince her father that she is smarter than her brother and deserves to run the business.  Of course, she has no idea that her brother has run afoul of the underworld criminal called Beast and it will be up to her to save him and the business that she has dedicated her whole life to.

Savior Whittington known as Beast finds himself waking up in a carriage occupied by two ladies and all he can remember is being knocked on the head while escorting smuggled goods that would make their way to fancy homes in Mayfair, one enterprise that makes up the Bareknuckled Bastards many sources of their wealth.  Abandoned and raised with his siblings by his adopted mother in the poorest section of London.  They have become the protectors and providers of the downtrodden and those forgotten and left to struggle for survival in the environs of the slums.  Vowing revenge on the person who has stolen at least three of his shipments he will do whatever it takes to protect his family and the people who depend on him.

When Henrietta finds out that his stupid inept brother has stolen from Beast she makes a deal with him.  If he helps her with the plans she has for her life she will pay him back for the lost shipments.  Neither one of them counts on the unexpected attraction and the deadly game that is being played out with an enemy that could destroy everything that their hearts desire.  Beast will try to push Henrietta away to save her life.  Henrietta will do anything to save Beast him and their love.

I love Sarah's books.  They are full of stunning characters, fast-paced plots with surprises and beautiful rich prose that will leave you breathless and endings that will satisfy the romantic in readers who crave Happily Ever Afters.  I recommend this book and Series to all who love Historical Romance.

Received a complimentary copy for an honest review.
Posted by The Reading Wench at 5:45 PM 2 comments: